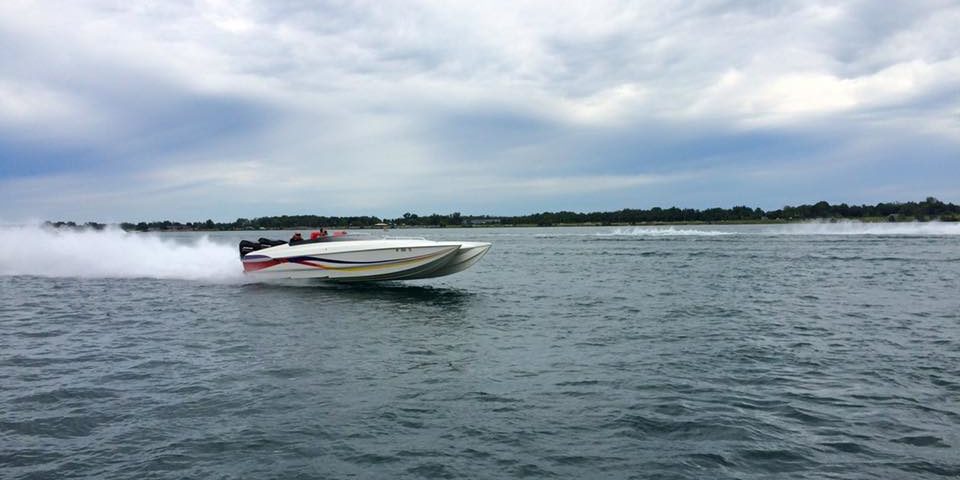 Like most powerboaters, Chris Overkamp of Bow and Stern Marine in North Tonawanda, New York was just looking to pick up a little more speed on his 2000 Spectre 30 running triple Mercury 2.5 Outboards. Perusing the various boating forums most people with the same application claimed that 110 MPH was the most you’d get with that setup.

Chris wasn’t having any of that, he knew this boat could make 120 MPH but just didn’t know how to get there. He raised and lowered the drives a few times, played with the toe and the cowlings, but none of that helped get to the magic 120 MPH mark. The only thing left to try was the props. He started doing his research, checking out websites and calling various prop manufacturers. One day Chris gave a call to BBlades Propellers and spoke with Brett Anderson. Chris knew that day he’d found his Prop Man:

“What I really like about him is that he would spend the time with ya, no matter who you were or what you did or anything and I really liked that.”

“We started at a constant 108, 109, 110 playing with prop diameter. What I liked about him was when he sent me a prop with the program that wouldn’t work, we would continue to work and keep working.” Their persistence paid off and with vigorous testing and work. Eventually they found the right props for the job. They settled on a pair of 14-1/2×33 3 blade custom cleavers on the outside motors. But the coupe de grace was the center prop:

“We tried his 4 blade Blaster props. We tried different cleavers, different everything and the 2.5 was spinning at 7800 RPM. So a cleaver was determined the best candidate, that’s just what this boat loves. He made me a 15×34 custom offshore race finished cleaver, and at the end of the props is their little signature move. They put like a 45 on the end of the blade so it will create a little less drag and reduce slippage.”

Brett, Brad and all the staff at BBlades went to work. Through vigorous production, testing and adjustments, the props were finished and sent on their way. Once installed Chris couldn’t wait to give them a test run.

After further tests Chris was able to pull out a full 13 MPH gain on his previous top speed. The sheer magnitude of the speed gained was quite apparent soon after.

“We just had a Buffalo Poker Run here. There was 102 boats with some serious stuff here, and I was the 3rd boat in the harbor. Everyone was like, “Holy mother!” Cause that thing runs.”

You don’t pick up 13 MPH and not turn a lot of heads. At Bow and Stern Marine, Chris wasn’t short of inquires from his own customers and how to prop up their boats for more speed. Chris knew just the guy, and now Brett and the BBlades team are hard at work on a 308 Skater trying to push it up over 100 MPH when 90 is the best it could do after a recent re-power. We’re sure Brett and BBlades team are up for the challenge.

This article originally posted on PowerboatNation.com.