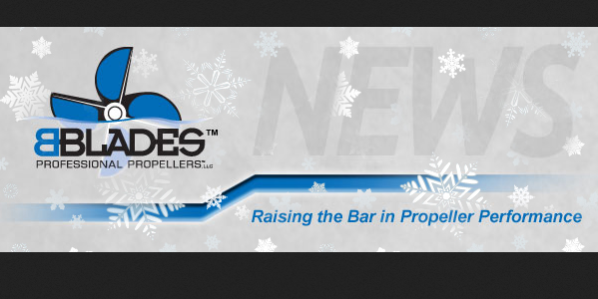 While Winter has been mild thus far in most of the U.S., it’s still winter enough to drive many of us off the water; but, who has time anyway with holiday preparations?

As 2015 winds down, BBLADES Professional Propellers thanks you for making us your go–to source for all things props and your other performance set-up needs.

If you’re spending the long Winter longing to get back on the water, come kill some time with us on the BBLADES Facebook page where boaters from around the world share their experiences, we offer tips, racing and other news, as well as early tip-offs to special offers!

All of us at BBLADES thank you for your loyalty, and wish you and those you love a most joyous, blessed and safe holiday season, and a Happy and Prosperous New Year!

EARLY GIFTS TO YOU FOR YOUR LATE GIFT GIVING NEEDS Still looking for a gift for the boater in your life, even if it’s just you? BBLADES is offering some great deals in time for the holidays, or just to help you get through winter with some type of boating activity.Available now through Christmas Eve (December 24, 2015), we are offering BIG savings and some freebies!

Buy ANY new propeller from BBLADES via our website, phone orders, or in person by December 24, 2015 and receive a FREE BBLADES hat or T-Shirt! Imagine your excitement of unwrapping a brand new propeller (even if you bought it for yourself)!

Once again we’re making it easier – or, at least, less expensive – to give a gift with a 10% Discount on BBLADES Gift Certificates of any value through Christmas Eve. You’ll need to enter promo code BB015 at check–out to get the savings, and make sure you indicate on the order if you want the certificate shipped, and where. These make an excellent gift for the boater in your life, or stuff it in your own stocking for future discounted purchases. BBLADES Gift Certificates are good toward any BBLADES product or service and are good for one year. During January and February, BBLADES will inspect and repair your stainless steel wheel, perform lab finishing to maximize the performance of your prop, or customize any new propeller, for just $85 an hour. That’s a savings of $17 an hour, and too good an offer to pass up! It’s not like you’re using the prop much during the off–season anyway, so take advantage of the Winter months to hone in on your prop performance!

No matter the brand, BBLADES can perform whatever propeller work you require.  If you need to replace a prop, we offer competitive pricing on Mercury, Hering, Hydromotive, Signature, Acme and Turbo, not to mention our own line of BBLADES Propellers.

The slower winter months—when Northerners are just dreaming of boating—are the perfect time to have propeller work done. Don’t wait in line next spring!

Now is also a good time to start planning to take advantage of BBLADES Propeller Testing Program, as soon as the weather breaks. The Winter Tune-Up Special ends February 28.

You would think winning a third OPA World Championship would be pretty exciting stuff, but for the crew of Saris Racing Engines, their first-ever OPA National title was “rather special, all the stars lined up,” according to driver Johnny Saris. His father, Jason, works the sticks – and is an OPA National title winner – but never before with his son and their navigator Verne French. “I really wanted that jacket,” Johnny said, referring to the championship swag awarded the winners.

Since 2013, the Saris team has been running a pair of BBLADES blue printed 30-pitch Bravo One propellers that have powered their 32’ Cobra with twin Saris 650 engines to all of their victories. “When we first ran these props, we did not have time to test them. Brett [Anderson, BBLADES co-founder] told us how the props should perform, said ‘trust me,’ and we did,” the younger Saris said.

“The props did everything Brett said they would, and more; they work really well in rough or calm, accelerate out of the turn, provide great stability in the turns, and provide the bow lift our big, heavy boat needs.”

While many race teams have at least two sets of props, not many run the same props in every race for three years. Johnny Saris reiterates that the props work, adding, “I don’t want this to sound arrogant, but until we start losing, we’re afraid to change ANYTHING.”

You can read Johnny’s first–hand accounts of the combined OPA Championships at speedonthewater.com.