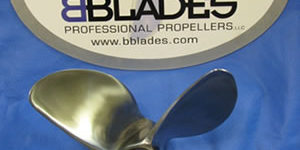 BBLADES Professional Propellers is launching its new, proprietary line of propellers with the BBLADES ‘Blaster™,’ a full-on, 4-blade, over-hub exhaust high-performance outboard prop designed for a wide variety of applications from a single-engine padded V-bottom to multi-motored air-entrapment cats.

The BBLADES ‘Blaster™” starts as a solid, one-piece casting of 98-percent virgin stainless steel, poured in the USA and then lab-finished; cut, shaped, honed and rubbed to a Satin Brush Race Finish in BBLADES’ Princeton, Wisconsin prop shop. The ‘Blaster’ is a “clopper-style” propeller; half-cleaver, half-chopper with the best characteristics of both. Like a cleaver, the ‘Blaster’ features small blades with a straight trailing edge. The over-hub exhaust reduces drag and performs best piercing the surface of the water. Like a chopper, the blades are stream-lined; rounded with a big cup on the trailing edge. The full, parabolic rake angle increases as the blade moves away from the hub creating overall lift from the transom to the bow.

In short, the BBLADES ‘Blaster’ is designed to deliver optimum lift, lightning-fast trim reaction, maximum performance and minimal stress to the blade area. Available in right-hand and left-hand rotation, the 14.75-inch diameter and 2-inch pitch increments (from 24″ to 32″) make the ‘Blaster’ a versatile competitor which can be customized to any application and set-up. The ‘Blaster’ is sold with a one-year factory warranty against manufacturer’s defects, and is available for test through BBLADES’ exclusive Propeller Demo Program, the only one of its type in the industry. A price of $799.00 is being offered during the introductory period.

“From day-one, having our own propeller offerings has been a goal,” said BBLADES co-owner Brett Anderson, “So this is a natural progression. It has taken some time, but we wanted an offering that wasn’t a ‘me too;’ something to fill a need for boaters, and the ‘Blaster’ is a perfect fit,” he said. “Our passion for performance boating and our knowledge of the available prop options out there make us very confident customers will be pleased with the BBLADES ‘Blaster’.”

One such customer, Dale Rayzor of Northern California, who owns three boats of his own and tested the ‘Blaster’ on a 21′ Trick, a 20′ Stoker and a 19′ Cougar. “I put on over 200 miles with the Trick and I REALLY liked [the ‘Blaster”], but I wasn’t surprised, because every boat I have run it on has liked the prop,” Rayzor writes. In addition to acceleration, Rayzor calls out the handling characteristics of his Trick with the ‘Blaster,’ and states, “The boat is a much better boat in every which way now.”

Of the Stoker, Rayzor reports an overall handling improvement and “Bottom-end and midrange [acceleration] felt very good with the ‘Blaster,’ better than with the [two competitive propellers also tested].” And he had little different to say after testing the ‘Blaster’ on the Cougar: “The Cougar tends to lean to the outside at speeds under 70 mph,” Rayzor explained, “With the [‘Blaster’] it didn’t exhibit this bad trait nearly as much. It was a markedly better boat with the [‘Blaster’}. It didn’t spin coming on plane like the three-blade and accelerated much better, especially in the midrange,” he enthused.

Currently, the ‘Blaster’ is available exclusively from BBLADES, but dealer, OEM and retail inquiries are welcome. BBLADES can be found on the web at www.bblades.com and can be reached at 920-295-4435.